In this passage, we see the people of Israel, who have been living their own way and not following God, doing something worse: they were treating God like a genie. They thought they could control him and use him to defeat their enemies.

But the author of 1 Samuel insists, “The Lord Almighty…is enthroned between the cherubim.” 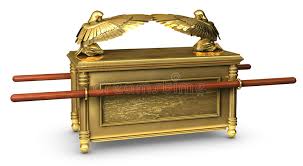 Usually when you see that expression, it’s talking about the ark, because God usually met with Moses and the priests in a cloud over the ark. (Leviticus 16:2)

But was that what the writer was saying? In this story, the cloud of God’s presence was nowhere in sight.

I think it’s possible that the writer wasn’t talking about the ark, but the heavenly reality that the ark represented. That in heaven, the cherubim honor God as he deserves. This in contrast to the lack of honor for God that the Israelites had.

And at the end of the story, the daughter-in-law of Eli gives birth and names her son, Ichabod, which means “No glory” or “Where is glory?”

She meant, “Where is the glory? God has left us. There is no glory here.”

But perhaps God was asking the same thing to the Israelites and us.

Where is the glory and honor he deserves?  The cherubim rightfully give it to him. Do we? At church, in our homes, at our work, in our lives, do we honor and glorify God?

Or does God look down and say, “Where is the glory? There is no glory here.”

I'm from Hawaii, but have been in Japan as a missionary/English teacher since 1995. I'm currently going to a church called Crossroad Nishinomiya, an international church in Nishinomiya, a city right between Kobe and Osaka. Check out their website: crossroad-web.com 私がハワイから来ましたけど１９９５年に宣教師と英会話の教師として日本に引っ越しました。 今西宮にあるクロスロード西宮という国際の教会に行っています。どうぞ、そのホムページを見てください： crossroad-web.com
View all posts by bkshiroma →
This entry was posted in Books of History, I Samuel, Old Testament and tagged Ark of the covenant, Eli, glory. Bookmark the permalink.